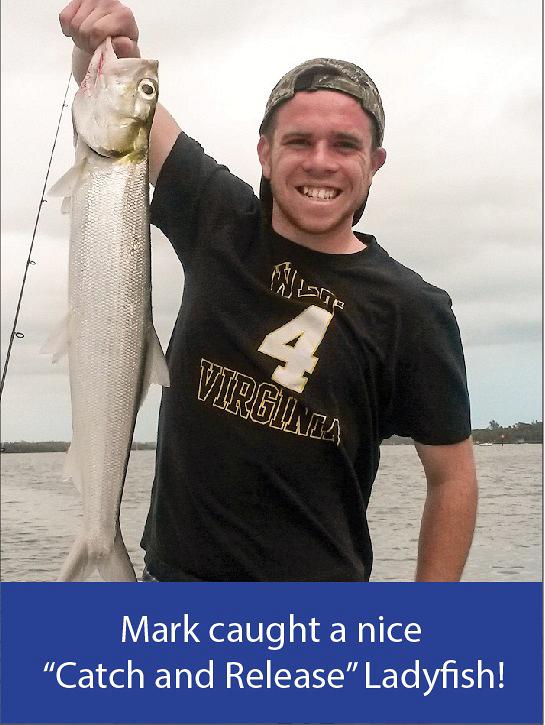 When the wind blows from the north “go not forth”, is the saying, referring to ocean fishing in our area. A good alternative for venturing out into the ocean is to head up to the Intercoastal Waterway near marker 42 where the ladyfish bite was happening this past week.

Some fishermen I spoke with caught the poor man’s tarpon, up to three (3) pounds using jig and shrimp combos, or plastic tail artificials. Ladyfish will also eagerly eat a white fly with a bit of crystal flash tied in, along with some big hologram eyes. Some suitable tackle to use would be ultra-light spinners with 4 to 10-pound test and a 20-pound 2-foot fluorocarbon as a leader. Pound for pound, ladyfish are great fighters. They run long and hard then usually put on quite an acrobatic show. When fishing for the ladies you will most likely catch other fish such as jack, bluefish, drum, snook, trout, pompano or even a redfish. The fish may be on either side of the waterway, so look around. At times they are flipping on the surface. Try different baits in varied depths.

Also, a word to the wise -  don’t block any channel!

Capt. Cliff Budd can be reached

Introducing Manatee Whisperer Tours
Paddle board or kayak along the beautiful Jupiter Florida intracoastal waterways and get up close and personal with...
Go To Article
Justin Jeffreys

Learn More About This Boat